Many of our teams spent Memorial Saturday and Sunday, during fleet week, on the Intrepid with the Red Cross.  It was a wonderful venue, one that our teams will not soon forget.  We asked those teams that visited for their impressions of their day.  As you can see, from their comments, they had a great time and felt that they had an impact on those also visiting that day.  Some of their comments are below: 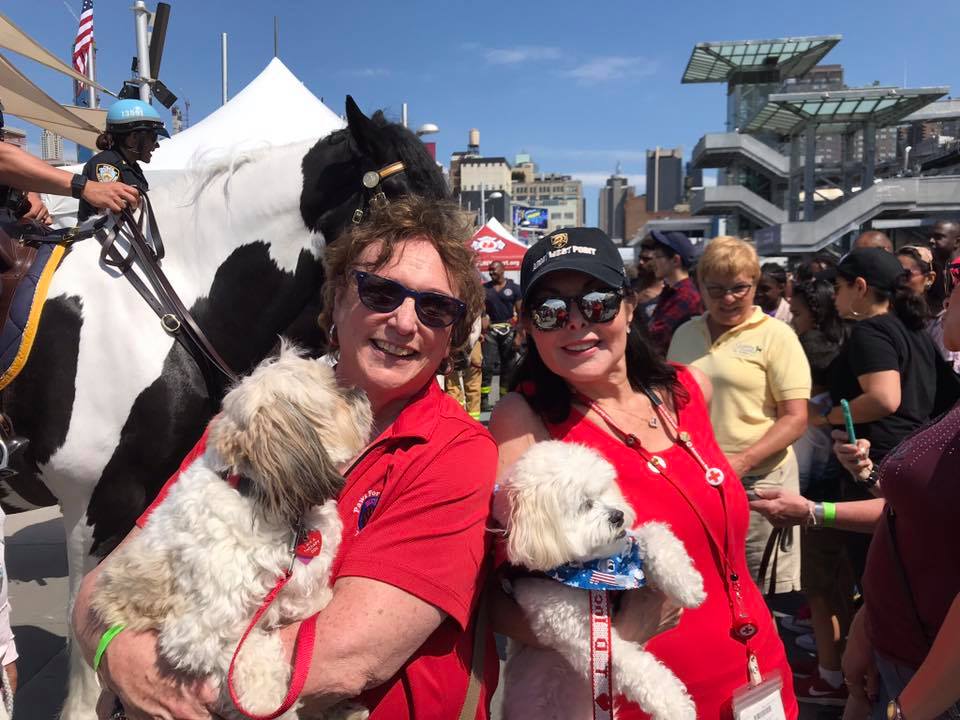 Lulu and I had a great time as usual on the Intrepid over Memorial Day weekend. We became creative by using Ivy Grace and Jake’s water bowl to collect donations for our cause, to running into firefighters and navy men. The 2 tired Lulu’s were pooped at the end of the long day.  Judi Seidman & Lulu 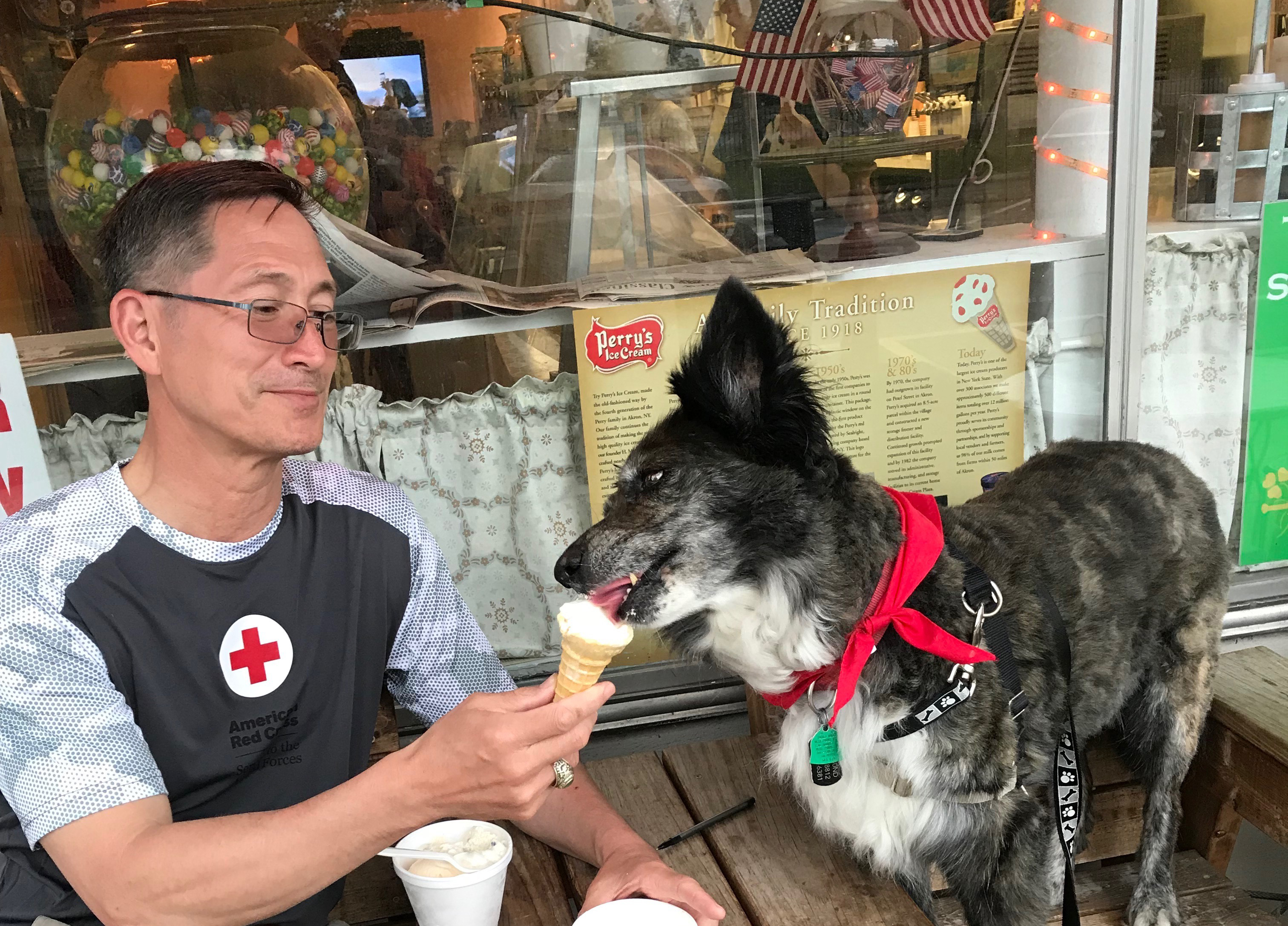 The Civil Air Patrol high school students had a good time with Gunner and asked a lot of questions about WestPoint that Phill had to answer. I think we talked them into going Army not AirForce.  Stephanie & Gunner 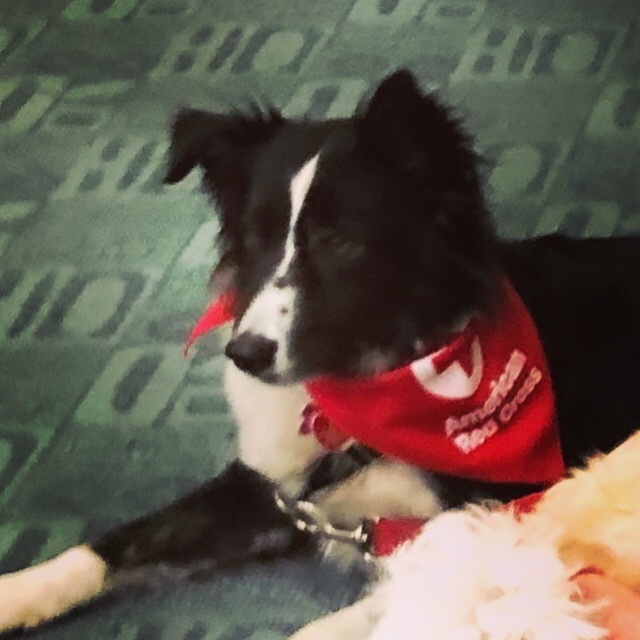 We had a great day. Very hot so it was nice to be able to go on the Intrepid and cool off inside, but Gracie did well and we talked to a lot of people. The Red Cross members had the table all set when we got there and there were plenty of people there. We walked all over the ship, came out and walked around, spend some time at the table and did that circuit a bunch of times. We did get to talk more in depth with a Marine whose ship was docked next to the Intrepid. He has an explosives detection dog that he works with – super well trained – there with no leash and no need for one. He is stationed in Camp LeJuene (?) in NC and we talked about therapy dogs and training as our dogs met. I so admire anyone in the military!Except for being hot, Gracie was pretty unfazed by all the activity and people.  Glad we went!  Kelly Clinchy & Gracie 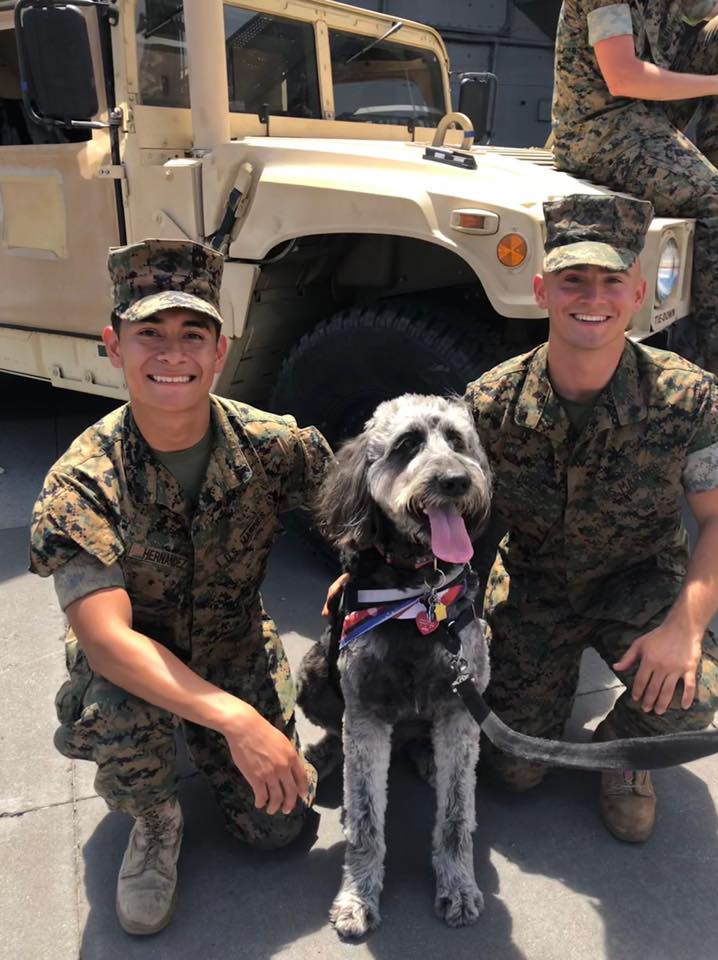 I met with an older veteran inside the Intrepid. As Monty sat next to him and enjoyed some “scratchies” from the gentleman, I said to him “Thank You for your service” His response stunned me, he said “No no thank you for the service your providing, you and your dog” I’d never presume that our volunteering compares at all to what our military provides, but I was quite taken aback by this moment. It illustrated to me how important the work our dogs do and the healing they provide. Quite an amazing moment to be a part of.  Ken Reedy & Monty 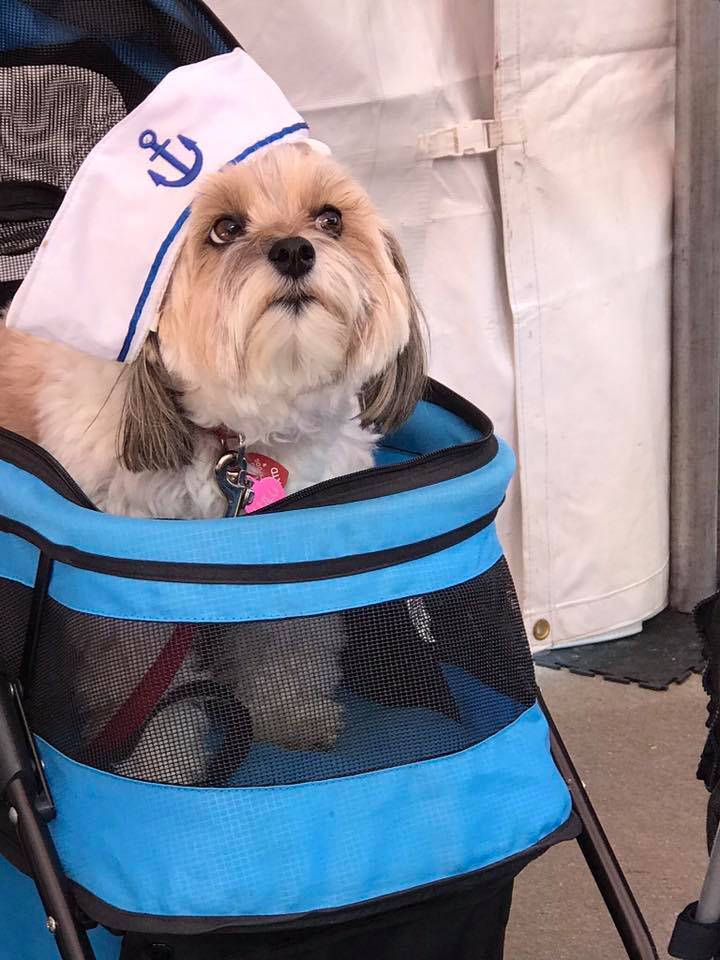 For me, visiting the Intrepid is personal. My dad was in WWII and in the Navy. He spent his time on a naval ship in the South Pacific. He was injured on the ship because his ship was bombed by the enemy. Being on the Intrepid let me visualize what it must have been like aboard a naval ship during that time. It is also such a happy time, people are in a festive mood and very moved by the history the ship represents. It has allowed me to personally thank naval men and women for their service. Everyone loves seeing the dogs and being part of the Red Cross completes the experience. On the Intrepid, kids and adults have an opportunity to write postcards to enlisted soldiers to wish them well, be safe and thank them for their service. The whole day is a roller coaster of emotions. But bringing our therapy dogs is definitely the highlight. Hundreds of people pet, talk and smile at our dogs. They prove over and over again how their positive presence is always valuable. Judy Audevard & Lulu 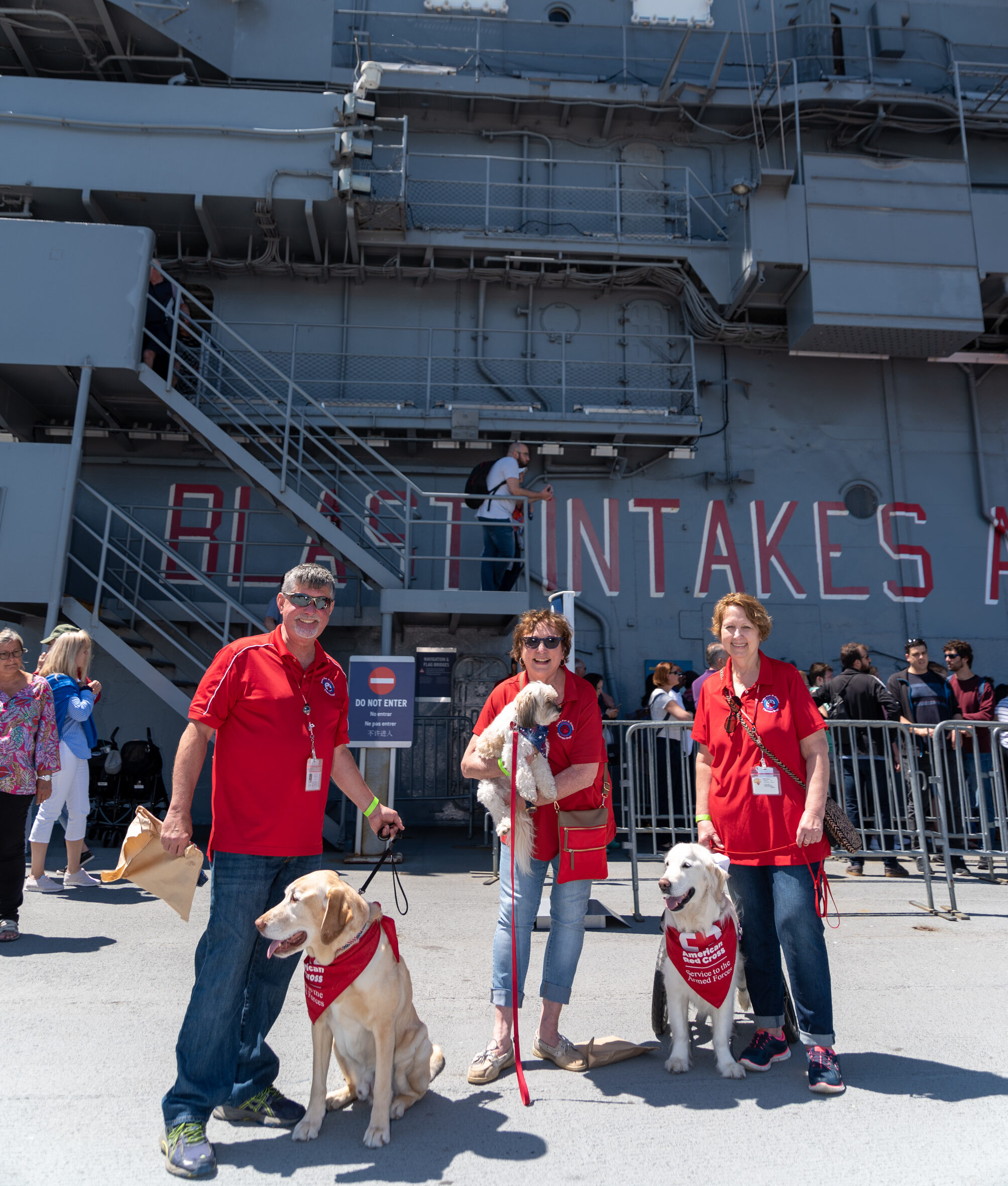 Support Hudson Valley Paws For a Cause

It is through your generous donations that we can continue to grow and serve our communities by sharing the love and kindness of our dogs. Our mission is to increase public awareness and appreciation of the benefits of pet therapy so that it becomes widely accepted by the medical and educational mainstream. Thank you for your support.

the latest NEWS and events 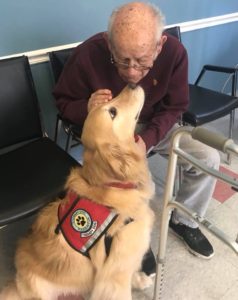 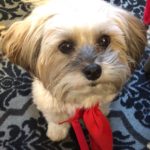 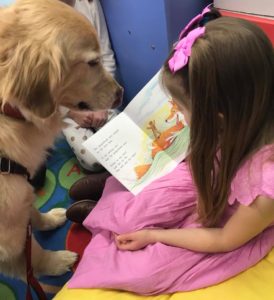 Our dogs have been certified to encourage children to improve their reading skills in schools and libraries. Often a child who is unsure of him/herself will relax and read to a dog, who is non-judgmental. Our handlers have been trained to act as the catalyst between the dog and the child.

We participate in programs with special needs children. The therapy dogs often help to engage the child in social interactions with each other. We currently visit:


The group has also participated with soldiers at West Point with special needs such as PTSD and traumatic brain injury.

We also work with nursing homes, shelters and programs such as:

Colleges call us to visit with their students during exam weeks. The students stop by and de-stress before and between exams. We also support the Red Cross Blood Drive efforts.
We have worked with:

We provide educational programs such as:

We participate in charitable drives and public events such as: 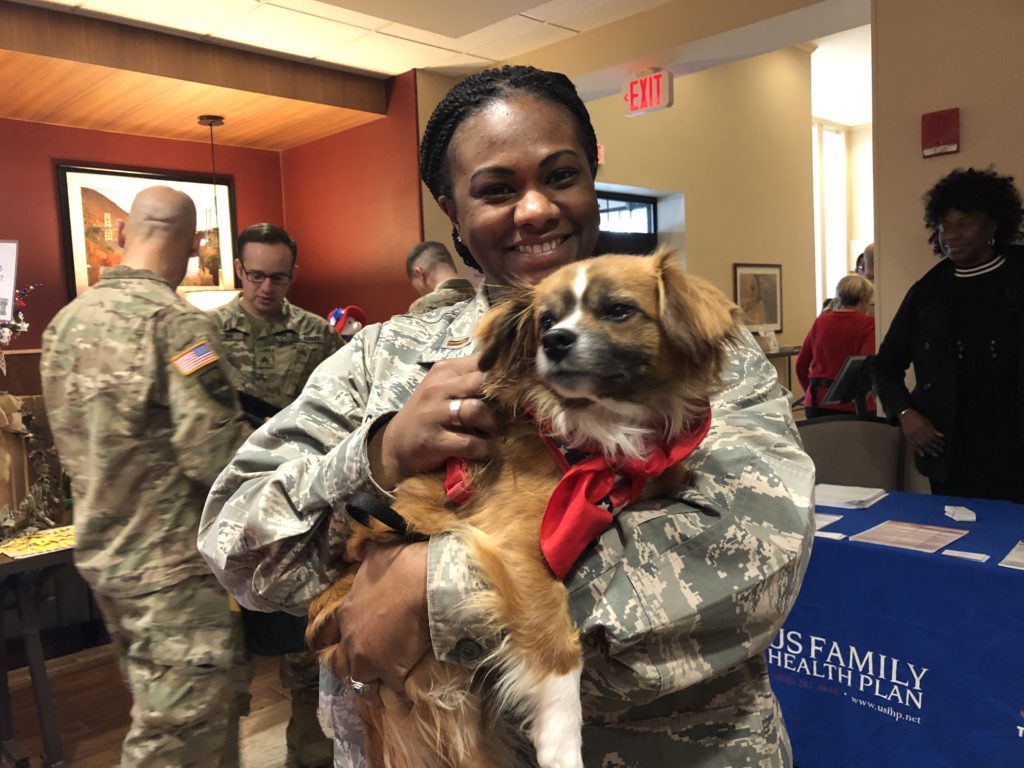 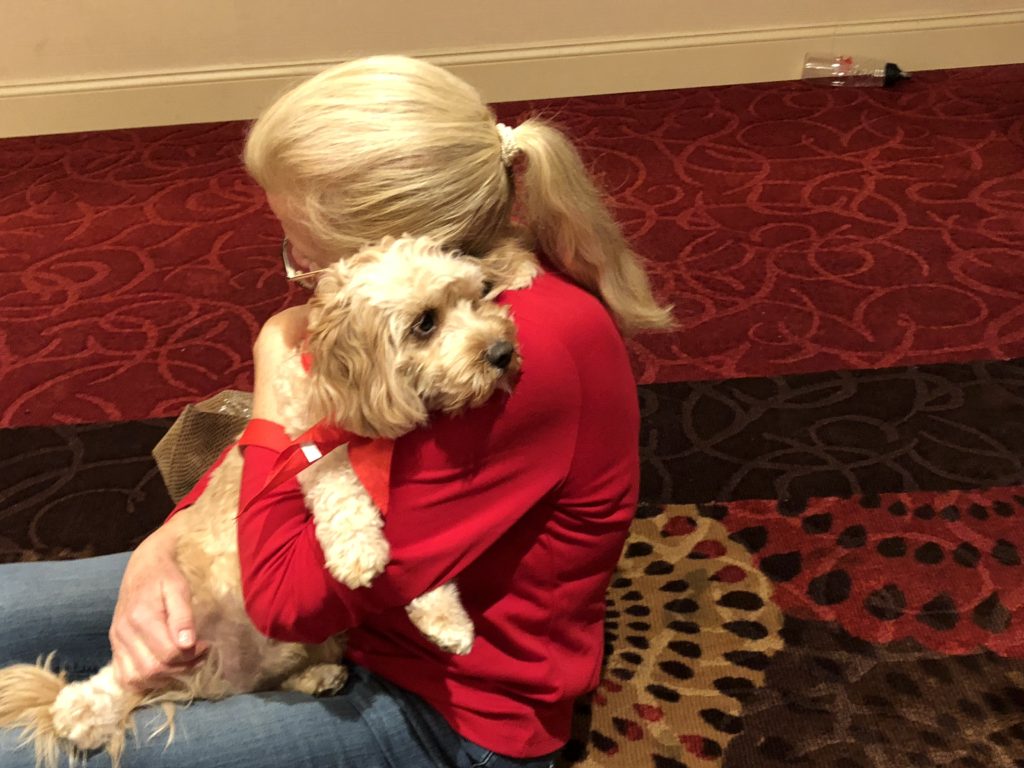 The contents of this website as well as the contents of our related social media sites (branded HVPaws) are owned or licensed by Hudson Valley Paws for a Cause. Material contained on these sites must be presumed to be proprietary and copyrighted. The use of any Hudson Valley Paws for a Cause content for any reason is unlawful unless it is done with express contract or permission of the owners. 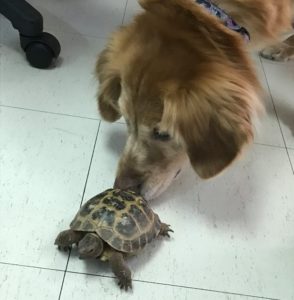